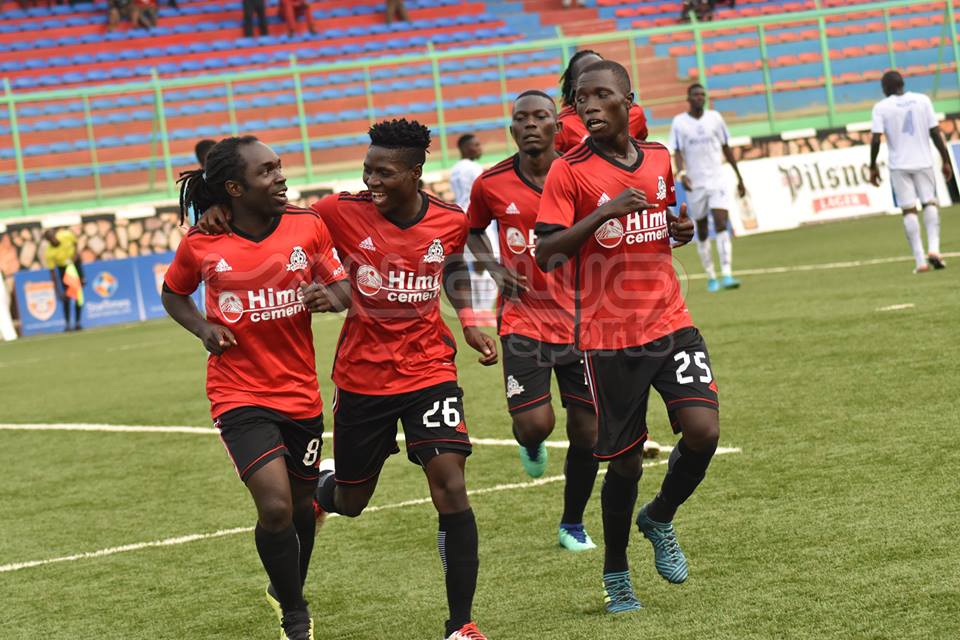 Second half substitute Dan Muzeyi Sserunkuma emerged as the hero as he scored the lone strike in Vipers’ 1-0 hard fough t win against Police at the St Mary’s Stadium, Kitende in Sunday’s only Uganda Premier league duel.

Sserunkuma had replaced left winger Duncan Sseninde with a quarter an hour of action left on the clock as a section of fans in the stands behind the Vipers technical area had lost patience to the extent of throwing over used plastic water bottles.

The diminutive forward, acquired from Express mid last season raced onto a long ball from the back from Geofrey Wasswa, shielded defender Denis Makoba Bigala before slotting the ball home past the advancing goalkeeper Davis Mutebi to spark celebrations from the fans.

Sserunkuma would have easily scored a hat-trick on the evening but was twice denied by Mutebi from close range in a space of five minutes.

Before the decisive moment of the game, Police’s Ruben Kimera and Juma Balinya had missed connecting with telling ground laid ball from substitute Norman Ojik across the goal area; and on the break Vipers scored.

As early as the second minute, Police’s captain on the evening Paul Willa had a block,stopping Tom Masiko’s effort from about 40 yards.

Vipers’ forward Brian Kalumba had a weak shot on target but it was a routine collection for goalkeeper Davis Mutebi on three minutes.

On five Vipers won the first corner of the game that was well defended by the Police defenders.

After two minutes, Police had the first real threat to the home side.

Juma Balinya raced to a diagonal pass onto the by-line, he beat defender Livingstone Mulondo but the forward slid and handled the ball with his hand to lose the advantage.

Former Police midfielder Rahmat Ssenfuka lost a body contest with Shakur Makeera and a free-kick was granted to the hosts.

Vipers’ captain Tadeo Lwanga had a rare shot from distance fly over the Police goal on 11 minutes.

Moments later, Police shot stopper Davis Mutebi reacted quicker off the line to deny an on-rushing Tom Masiko after a through ball from Ssenfuka.

Kasirye set up Kalumba who shoots but Mutebi in the Police goal was equal to the task in the 25th minute.

It was Vipers again as Wasswa crossed for Kasirye, but the lanky forward missed contact of the ball with the head.

Police defender Joseph Sentume swiftly recovered from a slight knock in the 32ndminute.

In the final chances of the opening half, Sseninde had two fierce shots from distance, one bouncing off the chest of goalkeeper Mutebi and the other missing target.

Upon restart of the second stanza, Vipers remained the hungrier entity.

Midfielder Tom Masiko had a shot off his weaker left foot well blocked by defender Makoba.

There was a double change for the home side.

Police had their first chance in the second half when Kimera’s shot was easily picked up by Vipers’ goalkeeper Bashir Ssekagya in the 53rd minute.

Ten minutes into the second half, the visitors introduced the industrious Johnson Odongo for Pius Kaggwa.

FUFA Referee Rajab Bakasembe waved off a penalty shout from Police’s Ruben Kimera after a push into the area by Wasswa.

In the 62nd minute, Vipers’ Joseph Jjanjali managed to find the back of the net but his effort was ruled for off-side.

Two minutes later, Police left back Arafat Galiwango had a rare shot from distance parried out for a corner by goalie Ssekagya.

The visitors called for the second change on 67 minutes.

Galiwango became the first and only player to be booked by referee Bakasembe 21 minutes to full time.

Vipers’ fans, normally calm during matches lost their patience and throw water bottles towards the direction of the technical bench with head coach Martinez Espinoza the intended target.

At this moment, Espinoza brought on striker Dan Muzeyi Sserunkuma for Sseninde with 15 minutes left on the clock.

Police engineered a move towards the hosts. Subsistute Ojik laid a tempting ball that Balinya missed and Kimera tapped at the back post but goalie Ssekagya stopped the ball.

On the counter, Wasswa played a long ball up front. Sserunkuma raced onto the ball, pocketed Makoba before finishing in style – a typical finisher’s strike.

Two minutes later, Janjali set up Sserunkuma who was denied from close range by the goalkeeper Davis Mutebi.

Under the next two minutes, Sserunkuma again chest controlled a Ssenfuka high ball but was tamed by goalkeeper Mutebi.

Police called for their final change on the day deep in added time.

Safi Nasur Basani was thrown on for a wasteful Kimera but it was rather too late to have an impact.

The venoms protected their lead and smiled home as referee Bakasembe blew time up for full time.

Maximum points push the three-time league winners to second on the 16 team log with 21 points, displacing Onduparaka who had smiled 2-1 over Paidha Black Angels in the West Nile derby on Saturday.

Vipers has played 9 matches, and lie second behind leaders KCCA whose lead is now reduced to three points.

Sserunkuma was named the Pilsner man of the match, a reward that comes forth with Shs 100,000 cash and a plaque (to be delivered later).

It was an entertaining game where the winning team (Vipers) utilized the chance from which the goal was scored. We had an upper hand in the entire game until that time when Vipers found the goal. Coming to the game, we missed five key players and it is not always easy to adjust accordingly because different players have different abilities.

It was a good match and plat form for us to regain the confidence in the Star Times Uganda Premier League. This victory together with the El Merriekh win give us the confidence heading to the next CAF Champions League away in Algeria. We are having a big pool of players and giving the chance to all the 29 players with an opportunity to play as they get confidence. I was also happy for the passion of the fans.