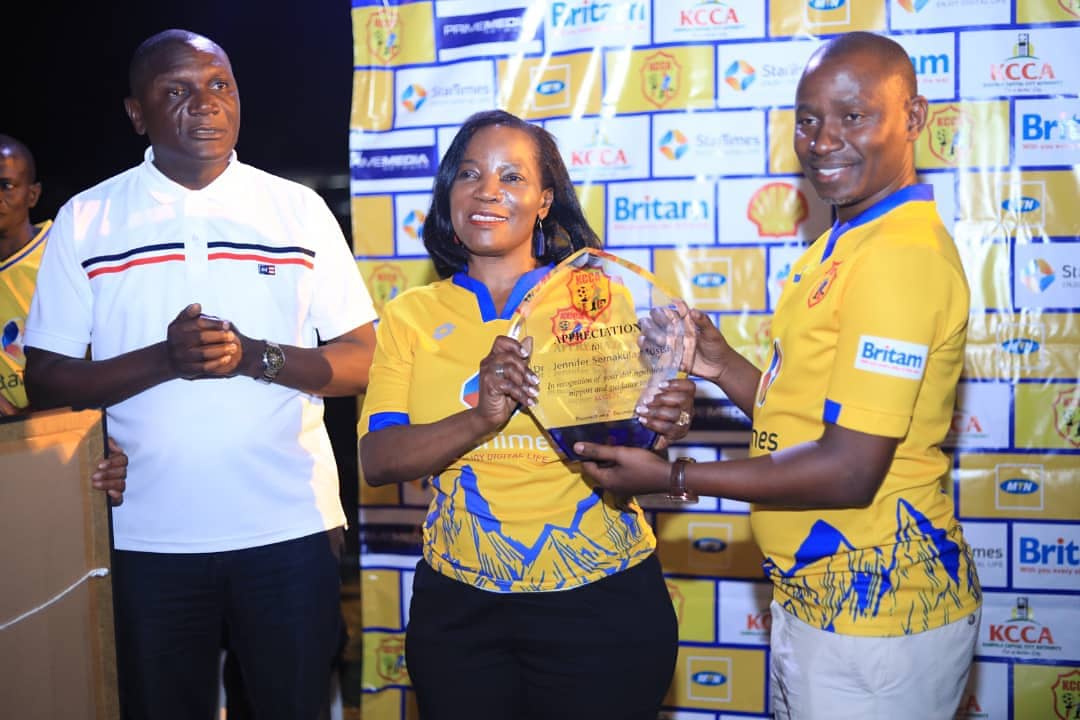 The position, unknown to many left the entire country perplexed. This happened because of the creation of a new institution Kampala Capital City Authority that replaced Kampala City Council.

As KCCA Football Club, they had won 8 league honours before she came in office.

After seven years of service, Musisi will voluntarily leave office on 15th December 2018 to start a new life altogether.

Last Saturday, it was a moment where bundles of joy mingled with agony in equal when the club officially bid farewell to the iron lady, mother of the club.

Ironically, it was on the same day that marked 100 games for manager Mike Hilary Mutebi.

Speaker after speech, you could depict Musisi has been an iconic figure at the club and will greatly be missed.

There was dancing, wining and eating on the night as Musisi was also named a life member for the Lugogo based club, also christened as the “Kasasiro” lads.

You are our mother. A parent does not forget his children.Please get a time and visit us whenever you are free. You have tried to see that our club competes with the continental giants. We shall remain focused and not disappoint you. We shall remember the time we scored

God brought us the Executive Director and Julius Kabugo, the former chairman at the right timing. I did not know Julius Kabugo and when he brought me here, I liked his ideas.  When met alongside Peter Kibazo. Madam ED, you leave behind good structures and I believe we do not have to worry what will happen after you have gone. This is now the benchmark of every club, true definition of a typical football club. The club now has structures and will definitely continue because you laid a great foundation. It has been good to work with people with class

The stepping down of the Executive Director came as a surprise. Thank you so much for the time you have served. We knew where KCCA FC was and how much it has transformed when you became Executive Director. As KCCA FC fans, we shall remain loyal to the club. We also pray God blesses all your other endeavors

This is a great honour to be appreciated. It is a sign that good work has been done. I am also happy that KCCA FC turned into, just like KCCA the organization. I thank all from players, coaches, board, fans and the support team. It has been team work. In a special way, i thank Mike Mutebi. In many ways, Mutebi is like me, he has not lost focus. Being a life member,  i will keep committed to the club. Julius Kabugo introduced me to football matters that I was green about. He convinced me that football can generate its own money and improve upon the image of the institution.

We thank Jennifer Musisi for all the work she has executed for KCCA Football Club. I also thank the players, fans, club leaders and the technical wing of the club