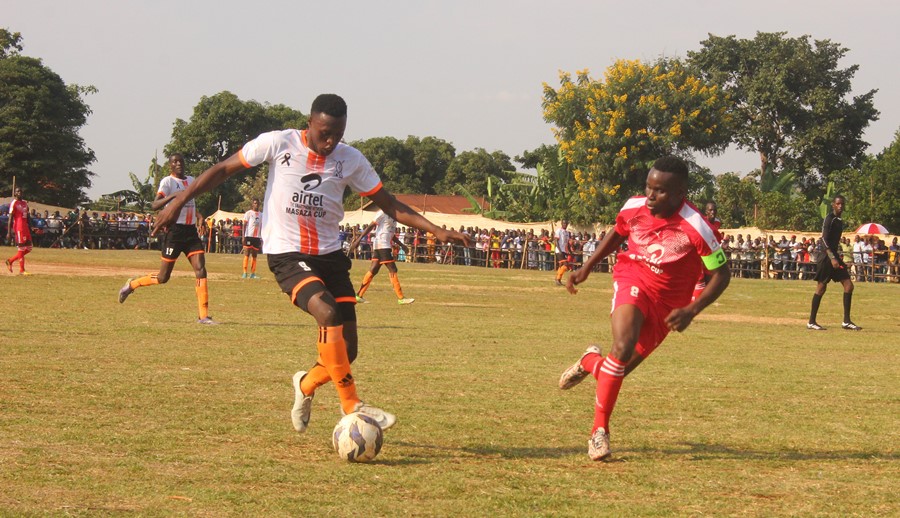 A total of 18 goals were scored on matchday two of the Airtel sponsored Masaza football tournament.

Ssese’s 4-1 drubbing of Buvuma in the battle of Island teams played at the Lutoboka play grounds produced the most goals, five.

Denis Mwemezi starred with all the four goals for the home side, Ssese.

Mohammed Nsubuga got the consolation for visiting Buvuma.

Ssese thus picked their first victory of the season having suffered a 3-0 loss on the road to defending champions Ssingo on the official opening match also graced by the Kabaka Ronald Muwenda Mutebi II.

Busiro’s 3-0 home win against visiting Buwekula at the Ssentema play ground ensured that they won their second game of the campaign.

Douglas Kizza scored twice and Emma Mwesigwa was also on the score sheet for the star-studded side.

Sadam Kasozi’s brace won the maximum points for Busujju in their 2-0 home win against visiting Kabula at Bbanda playground along Mityana road.

Mawokota and Bulemeezi remain winless in two matches as they settled for a one all draw at the Mpigi Police playground in a game that was marred by violence after the final whistle.

Towering skipper Ronald Ssekiganda gave Bulemeezi the lead on the hour mark with a stunning left-footed shot into the roof of the net past goalkeeper Musa Gitta.

The joy was however short-lived with the equalizer from dread-locked defender Simon Oryem Tabu who curled home a beautiful free-kick, beating the defensive wall and the goalie Amir Nalugoda into the bottom corner of the net.

Moments after the game, tear gas canisters and live bullets were fired to disperse a section of rowdy Bulemeezi fans who had a running battle with police.

Bugerere and Ssingo also settled for a one all draw at the Ntenjeru Ssaza ground.

Only one match failed to produce at least a goal. Butambala’s goal-less affair with Kyaggwe paid off no fruitful dividend in terms of goals scored.

The forth-coming match day three present the golden opportunity to wounded teams to make amends and those in command to consolidate their gains.

This tournament which has been played since 2004 is proudly sponsored by telecommunications giants Airtel Uganda Limited, Centenary Bank, Ngule beer, Total among others.