Buddu sought for the services of Kabonge since Mbabazi is currently with the Uganda Cranes team preparing for the CHAN two legged qualifier against Somalia towards the end of July 2019.

“It is a big honour to coach a team as Buddu Ssaza with such a big following. I will give the players latest tricks and techniques to win matches home or away. They should also know that I am master of kawoowo (classy passing) football. Fans will enjoy his stay at Buddu” Kabonge bragged.

Buddu team manager David Byarugaba indeed clarified on the circumstances upon which Kabonge was appointed.

“Because Mbabazi is busy with the Uganda Cranes job, he could not easily balance the job. There is no other option than appoint Allan Kabonge. We shall give him (Kabonge) all the support needed” Byarugaba confirmed.

For starters, Mbabazi had been appointed as head coach of Buddu Ssaza on May 22nd, 2019.

The flamboyant Kabonge has had a torrid time with different Masaza teams he has handled.

His tenure at Busiro and Buwekuula in the yester-years left more question marks than answers.

At the start of the current Airtel Uganda bankrolled Masaza cup, Kabonge nearly won the job to coach Kyaggwe but the administration had a second thought and handled the job to former Uganda Cranes midfielder Augustine Nsumba.

Nsumba has since resigned citing internal woes within the team that were a major push factor to his exit.

Back to Kabonge, he has a successful lineage as regards promotion of clubs from the second tier FUFA Big League to the Uganda Premier League.

Buddu and Kabonge return to the frey on Sunday, 21st July 2019 against the fast improving Mawokota, a side coached by Ssaka Mpiima, on the neutral Mandela National Stadium, Namboole.

Buddu will play at Namboole because they are under punishment by the tournament organizers, paying the heavy price for their rowdy fans.

They are pooled in Buttikiro group alongside former winners Bulemezi, Mawokota and Kooki.

Bulemezi leads this group with 9 points, Mawokota, fresh from a one-nil away win over Mawogola follows suit with 8, Buddu has 6 and Kooki (4) and Mawogola with just two points. 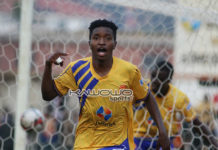