Substitute Ronald Nkonge scored with his first touch seconds after coming to salvage a draw for Bright Stars against Wakiso Giants on a soggy pitch at Wankulukuku.

Tom Masiko had given the Purple Sharks an early lead with a goal from a penalty and the visitors missed a plethora of chances to extend lead before they were punished.

Masiko sent goalie Simon Tamale the wrong way after Hassan Ssenyonjo was brought down in the area inside three minutes.

Geoffrey Sserunkuma who is yet to open his league account for Kefa Kisala’s side went close but his headed effort missed target by inches while Viane Sekajugo was denied by the waters on the pitch.

At the other end, Brian Kayanja asked questions but the half ended with visitors on top.

Bright Stars upped the game after the break but it was Wakiso Giants who still got the chances with Masiko denied by the waters while through on goal while Farouk Katongole cleared Sserunkuma goal bound header off the line.

Muhammad Kisekka made a change with Moses Okot and later Nkonge coming on and the latter made an instant impact scoring from a rebound after Kayanja was denied by the cross bar.

Sekajugo missed a golden opportunity as he slid with an empty goal at his mercy while Kirizestom Ntambi on his debut as a substitute shot inches wide with the goalkeeper beaten as the two teams remained inseparable at the final whistle.

Wakiso Giants moved top of the log with 7 points while Bright Stars are second from bottom with two points in four games. 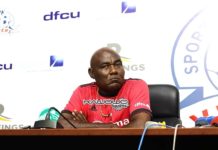 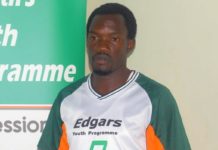