Uganda’s Tennis ace Duncan Mugabe has been knocked out of the Tombim Abuja Open after losing a battle of to seventh seed, Karim-Mohamed Maamoun of Egypt.

Mugabe succumbed to loss 6-4, 2-6, 6-2, Mohammed scheduling a semifinal confrontation with Meister on Friday.

The Ugandan had caused one of the upsets of the second round by beating fourth-seeded Tucker Vorster of South Africa 6-4, 7-6 but his success failed to make the home stretch.

Meanwhile, Egypt’s Mohamed Safwat advanced to the semi-final of the Second Leg with a 6-7, 6-4, 6-3 win over Antal van Der Duim of the Netherlands. 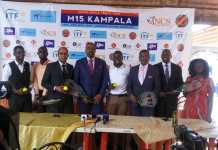