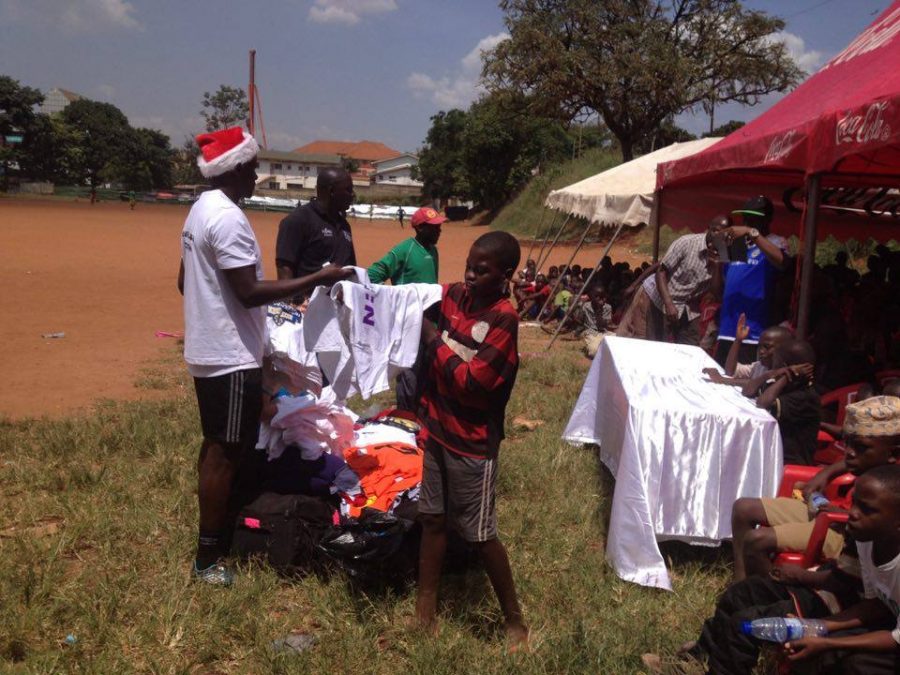 Talk about charity in sport, several come to mind. The many hands that have given are countless. However, one continues to stand out.

US based Uganda Cranes’ defender Henry Kalungi is one of those taking the lead – in giving back to society especially working with the underprivileged.

On Wednesday, Kalungi and his wife Jacqueline Kalungi, Tom and Susan Gunderson, SC Villa CEO Ivan Kakembo among others, took to Buganda Road Primary School playground to give to charity.

Kalungi – who plies his trade with USL side Charlotte Independence FC in the United Soccer League (USL) – first, took several kids through their paces, tipping them on how to make their performances better on pitch.

Then the best defensive player of the year at United Soccer League club Charlotte Independence – clad in a Father Christmas hat – later gave away gifts in form of scholastic materials – to the excited children from slum areas of Katanga and Kivulu.

1 Chron 16:34 "Oh give thanks to the LORD, for he is good; for his steadfast love endures forever"! Today has been a…

.@HenryKalungi today donated to the under-privileged. Here he takes a few kids through their paces at Buganda Road. pic.twitter.com/TYokH1rv8E

Several children got gifts inform of jerseys, boots and later dined to a sumptuous meal courtesy of the @HenryKalungi foundation. pic.twitter.com/f48QacUiA7

Kalungi in conjunction with his organisation – Henry Kalungi Foundation – also donated football related equipment such as jerseys and boots before treating the children to a sumptuous ‘Christmas lunch’.

The former Richmond Kickers player who has 15 caps with the Uganda national team, revealed to Kawowo Sports his future plans on charity.

“The foundation is going to aid the under-privileged children, ensure they leave the streets and acquire education.

“There are families that are struggling to educate their children as well, we shall help them as much as we can.

“‘How many kids can we support?’ even if its a million of them, we can help though it also depends on the support we shall have got from partners.

“Its not all about showing off here, we want to do it genuinely because i would have been in the same situation, but thanks to God, i have got a platform to offer.

“I do not want to solely play football, but to also change lives of these children.”

The mission of Henry Kalungi Foundation is to cater for the under privileged children of the slums to nurture and develop talent.