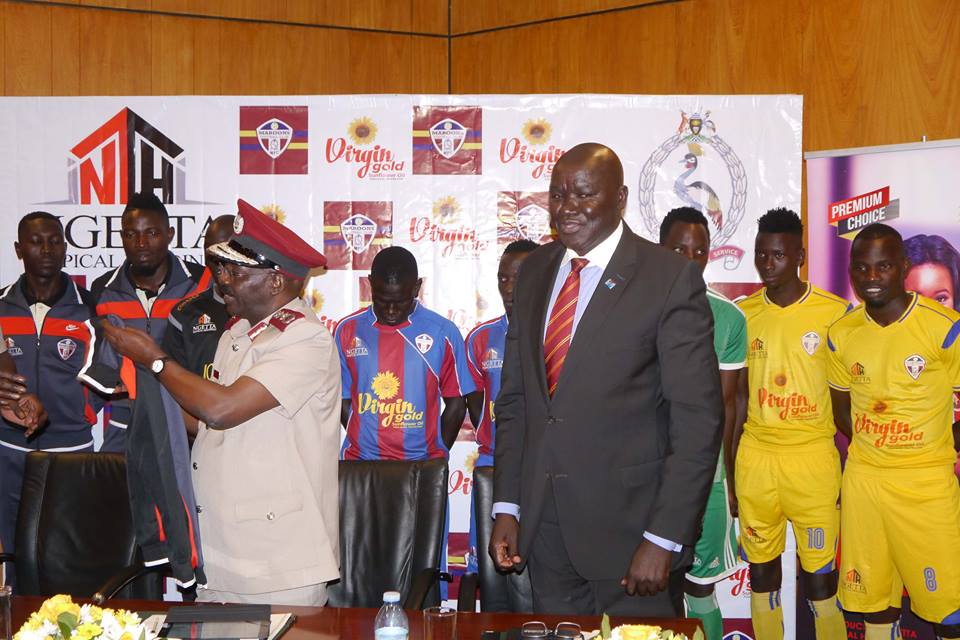 Since the inception year of 1960, Uganda Prisons run football club Maroons F.C had not acquired a main shirt sponsor.

From that time, the club has been solely funded by the Government of Uganda through the Prisons Service department and of late, a banking partner.

The “jinx” was finally broken in the year 2018 as the club partnered with Ngetta Holdings Limited for at least a year long duration.

Under the flagship brand Virgin Gold cooking oil, the Northern Uganda based firm has injected Shs 130M, bought three sets of jerseys, track suits and will brand the Luzira Stadium.

The sponsorship was unveiled before the media at Achwa Hall, Serena International Hotel, Kampala on Monday, 10th December 2018.

The two-time league champions (winners in 1968 and 1969) will therefore wear branded shirts with the Virgin Gold logo on the main front of the jerseys.

Byabasaija lauded the company and promised to help the club perform well and survive the relegation monster.

I thank Ngetta Tropical Holdings Limited for this generous offer. It is a wise decision because Maroons is a club of pedigree. We are not Nyamityobora or Paidha Black Angels, we are Maroons. Like we have done for other sports as Netball and Athletics, now we have centered on football development. We now have a budget and shall improve our current standings on the Uganda Premier League table standings

We are very happy to have Ngetta Holdings on Board. It has been a journey moved. They are partners of value.

In his remarks, Ngetta Holdings Limited CEO Omara expressed gratitude of partnering with such a historical club of Maroons caliber.

It is a pleasure to associate with such a historical football club as Maroons Football Club. Maroons was founded in 1962 and won the Uganda Premier League twice in 1968 and 1969. We are glad to be part of this relationship with such a club

Nsimbe described the sponsorship acquired as a motivator in the journey of the performing well in the league.

This is big motivation to the players and it lifts our morale at a time we are yearning for the best results week in, week out. We shall continue to work hard in training and matches so that we do ascend up on the table standings.

The team captain Sylvester Okello was equally elated upon the acquired sponsorship.

This is indeed a push factor for us the players and the technical team. We are ready not to disappoint our sponsors.

Meanwhile, Maroons host struggling Nyamityobora on Tuesday, 11th December 2018 at their Luzira Prisons fortress in a match that will witness Asaph Mwebaze return to Luzira for the second time in less than a month.

Before departing Onduparaka, Mwebaze lost 2-1 to Maroons in virtually his last game with the West Nile based club.