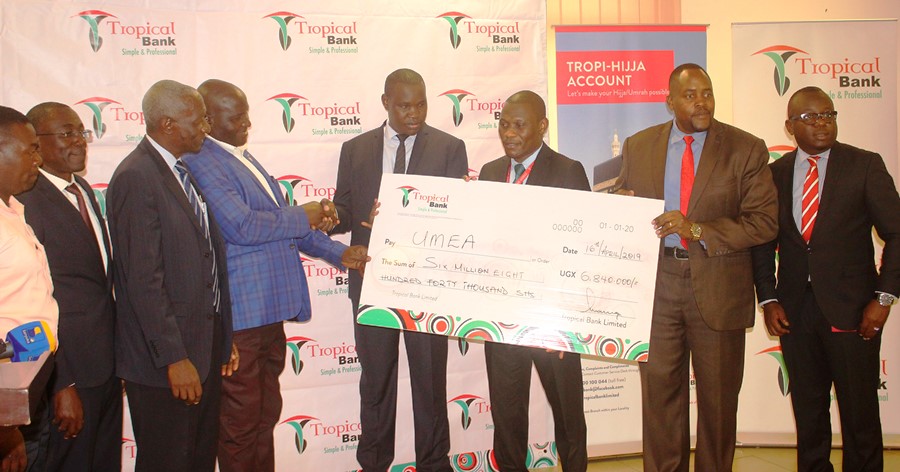 The 2019 UMEA Muslim Solidarity Games have received a major financial boost days to kick off on Good Friday.

A dummy cheque was officially presented to the UMEA Sports organising committee chairman Hajji Twahil Kiteezaala, who was flanked by other members on the committee – Hajji Hussein Lwembawo  (general secretary) and Ayub Khalifa (publicity secretary).


I commend the organisers of the 2019 UMEA Muslim Solidarity Games for continually having improved the Games. As Tropical Bank, we are focused to improve on the sponsorship. We urge our customers to also continue supporting us as we promote the flagship campaign of Tropi-Hijja

Hajji Kiteezala in his submission lauded Tropical Bank for the financial offer, for now three years in a row.

He also pledged to make the games better given the early preparations undertaken.


I thank Tropical Bank Uganda Limited for the support for now three years. We are ready to host successful games come this year Kasawo Islamic. Close to 50 schools have confirmed

A number of trophies, medals and certificates will be given to the exceling teams and individuals.

This year’s Games will be hosted by Kasawo Islamic Secondary School starting on Good Friday, 19th April through to Easter Monday 22nd April 2019.

The reporting day for all schools is Thursday, 18th April 2019 before the games off the next day.

Respective Winners for 2018 in Mbale: