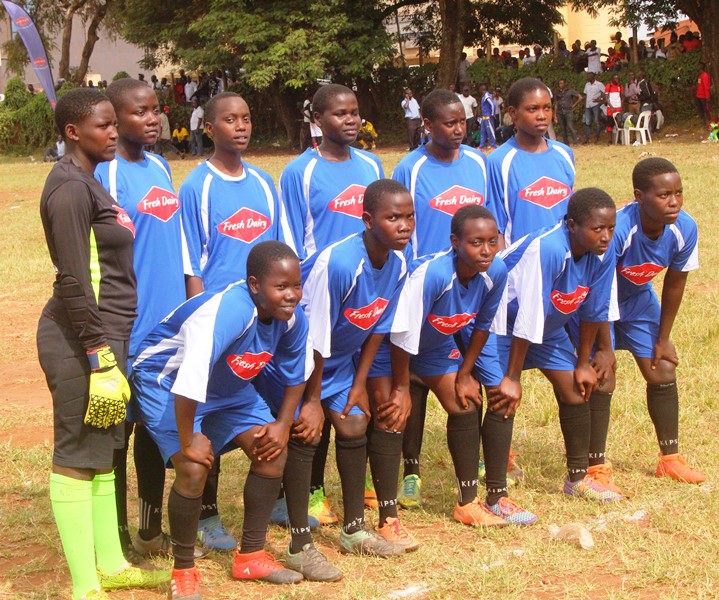 *Dates will be confirmed

Favourites in the 2019 FUFA Women Cup Uganda Martyrs High School will host She Corporates in the quarter final of this year’s edition.

This was confirmed at the draws for the fourth round held on Wednesday, 17 April 2019 at FUFA House in Kampala.

In the other matches, debutants Lady Doves from Masindi who have had an impressive season thus far will also play at home, against Olila High School at the Katushabe Play ground.

For starters, Olila High School were 2-0 conquerors of last year’s defending champions, Uganda Christian University (UCU) at the round of 16 stage.

Soroti based Echoes High School plays host to Tooro Queens at the Soroti play ground in the other contest.

The draws were conducted by two delegates representing the women at the FUFA General Assembly – Margret Kubingi and Owek. Florence Bagunywa Nkalubo.

The dates for the quarter finals will be confirmed.

Last year’s defending champions, UCU were ejected at the round of 16 stage by Olila High School 2-0.

No club has ever managed to successfully defend the championship.


As stake holders, I thank you for supporting the teams that engage in women football development. I thank FUFA for providing the perfect environment to operate from , sponsors and the Government.

This is the third edition of the tournament that is played on a knock out basis.

1 – Shall comprise of 8 teams qualified from the third round

4 – If the teams are not separated by Art 23 (3) above, spot kicks shall be applied to determine the winner.