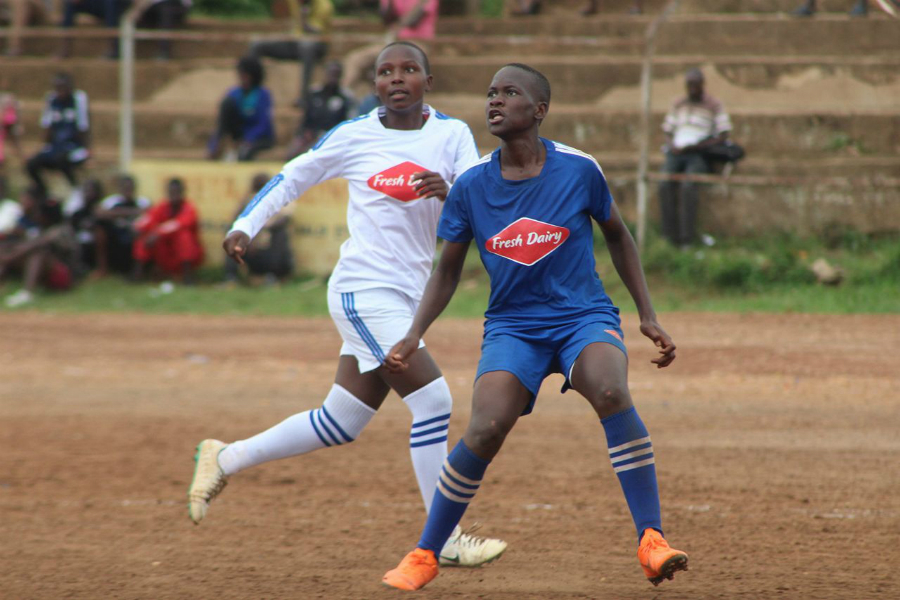 The four teams that will feature in the playoffs are known with UCU Lady Cardinals completing the puzzle joining Kawempe Muslim Ladies, Lady Doves and Kampala Queens.

Since the start of the season in September last year, there has been a number of players that have put up consistent performances.

Joel Muyita looks at the best performers of the 2018/19 season.

In her first season at the club, Daisy Nakaziro was handed the captain’s armband. Her abilities to command the team on pitch has helped the Masindi based side to reach the playoffs on their first time of asking. Nakaziro, who was at Muteesa I Royal University before joining Lady Doves, has been one of the key pillars for the team. Played 13 of the 14 league games keeping seven clean sheets. Juliet Adeke (Kawempe Muslim Ladies) who conceded just four goals and Vanessa Edith Karungi (She Corporate) with ten clean sheets also had a good campaign but I will settle for Nakaziro.

Nalumansi alias Naziz has continued to grow in stature as one of the budding right backs in the country. Ayub Khalifa put trust in the roving right back last season letting go of already proven Viola Namuddu who joined Makerere University. Everyone thought her void would be felt but this has not been the case with Nalumansi comfortably doing a good job.

One of the unsung heroes on the UCU Lady Cardinals team, Banura has been consistent throughout the season. Her performance attracted the attention of Crested Cranes coach Faridah Bulega who summoned her ahead of the game against Ethiopia albeit didn’t make the final squad. Banura beats Kawempe’s Grace Aluka and Marion Amangat (Olila High School) to this slot.

Centre Back: Christine Nambirigge (She Corporate)

Christine ‘Tina’ Nambirigge befits the common adage of “Old is gold.” The experienced player has been an integral figure for She Corporate. Despite the team not making the final squad, Nambirigge has put up consistent performance throughout the season. She gets a slot in my best XI ahead of Eunice Ilamai of Olila High School who has also been outstanding.

On top of fulfilling her primary role as a defender, Shadia Nankya has added scoring goals to her game thanks to the liberty given to her to surge forward whenever the team needs to score. She has scored eleven goals this campaign, just three behind joint top scorers Hasifa Nassuna and Fauzia Najjemba.

This will be a surprise pick for many but to those that have keenly followed the league this season will agree with me that Nakkuba has been an outstanding player. Playing as a deep-lying playmaker, the former Ajax Queens and Uganda Martyrs midfielder has been the fulcrum of Kampala Queens providing cover to the defence line but as well igniting attacks. The other players that have played equally well in the same position are Maggie Kayima and Phiona Nabbumba of Lady Doves and Ajax Queens respectively.

If I was tasked to choose the Most Valuable Player this season, I would comfortably go for Ritah Nabbosa. For everything that Lady Doves have done going forward, Nabbosa has been the think tank. Nine assists to her name, the former Western United and Olila High School player makes it to my best XI of the season.

Isra Soccer Academy is a team that would be comfortable staying in the league rather than vying for playoff slots. However, they had a shot at the playoff slots in Elizabeth group thanks to the performance from skipper Shamira Nalugya. If there’s anything that Isra Soccer Academy do going forward, Nalugya has a hand in it. Twelve assists and four goals this season, this means she was involved in sixteen of the twenty goals that the team scored.

Arguably the best central striker Uganda has currently, Juliet Nalukenge has not disappointed guiding Kawempe Muslim to a fifth successive appearance in the championship playoffs. Ten goals to her name this season mean she has improved from the seven she managed last season.

A player that needs no introduction for anyone that has followed Women’s football in Uganda. She finished the regular season with 14 goals, that is an average of a goal per game. Last season, the University side failed to qualify for the playoffs but Nassuna’s performance this season has dragged them there and will be seeking to help the team win the championship for the first time.

One of the top performers this season despite playing for a mid-table entity in Isra Soccer Academy. There is nothing that Isra have done this season and doesn’t have the names Shamira Nalugya and Fauzia Najjemba. Fourteen goals in her second season in the FUFA Women Elite League hence making her a joint top scorer alongside Hasifa Nassuna. It should be noted that Isra scored a total of twenty goals of which fourteen came from Najjemba. An ambidextrous player who is known for pace, ability to shoot and dribble, there is no defence that has taken her. Najjemba has scored against all the seven teams Isra Soccer Academy faced this season.

Guiding Lady Doves to the playoffs for the first time, Mbekeka takes charge as the coach for the team selected above.