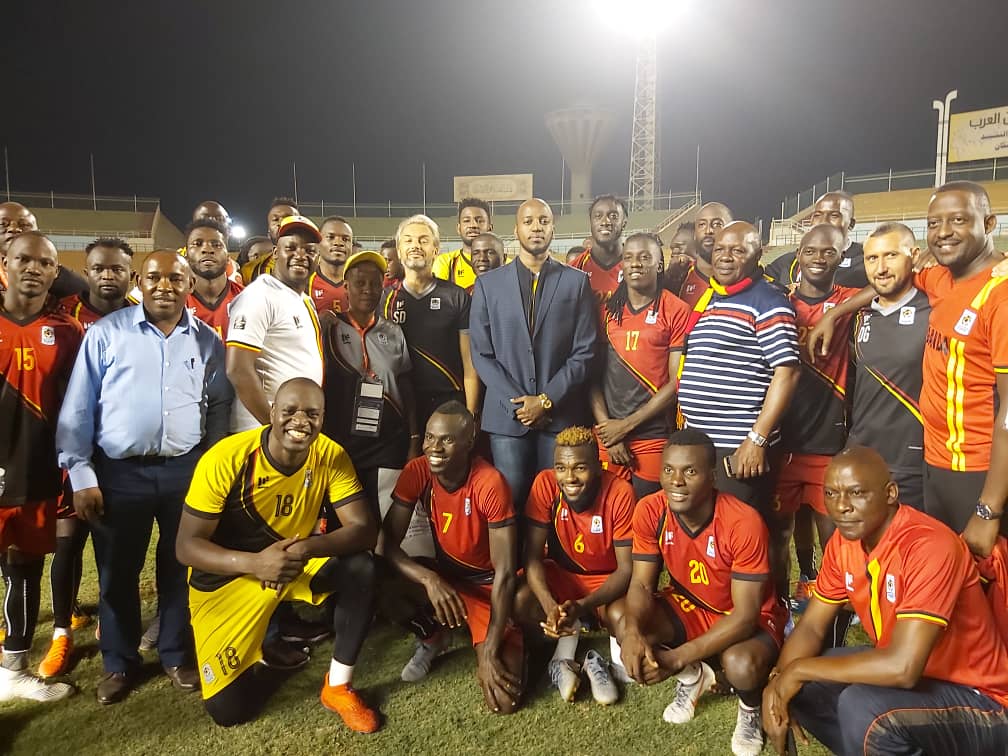 Cultural leaders in society are a respected group of special people in life.

They command respect, authority and their sheer God given favour.

When the King of Tooro Kingdom Oyo Nyimba KabambA Rukidi IV stepped foot in Egypt, there were bundles of joy at Cairo International Stadium.

At the airport, he was received by the Uganda Cranes overall leader of delegation, Florence Nakiwala Kiyingi, also the FUFA third Vice President and the State minister in charge of children’s affairs.

King Oyo traveled miles to pitch camp in Cairo and shoulder his weight behind the national identity in Uganda Cranes.

In fact, the youthful king was present during Uganda Cranes 2-0 win against the Democratic Republic of Congo.

On Monday, King Oyo made a surprise visit to the Uganda Cranes training ground at the Arab Contractors’ Stadium.

There was excitement when the King watched the night training session and was engaged in a photo moment with the players and team officials.

The mood was breathe-taking and everyone delighted by mere presence of the King.

THERE WAS JOY WHEN WE WON OUR OPENING GAME AGAINST DR Congo. the win promotes our vision of promoting destination uganda. everywhere on the streets of cairo, people are talking about uganda. those who did not know uganda are now googling about uganda. we should use this victory to promote uganda as a manifestation of tourism

King Oyo’s visit to the training ground further proved his undying love for his motherland, Uganda.

As we head to the second game against Zimbabwe Warriors on Wednesday night, the expectations from the people are high.

Uganda’s flag is flying aloft all over the streets of Cairo and at the main stadium – Cairo International Stadium.

The fans are keen and eager to rally behind their team for the entire duration of the match.

And guess? yours truly King Oyo will be in the stands for the second consecutive time to throw his weight and support behind the team.

All the three stanzas of the Uganda national anthem will be played prior to kick off and billions of viewers will be following live across the internet and television.

For 90 minutes, many more people who do not know about Uganda will get to find its nitty gritty as the Uganda Cranes fight tooth and nail on the well mooed grass.

For starters, Uganda is found in the Eastern Africa and it is best known as the “Pearl of Africa”, a catch phase baptized by Sir Harry Johnstone way back in the years.

Besides the enviable all year round weather, Uganda also habours hospitable people.

The marketing gimmick of all the aforementioned features will be put to the front by Uganda Cranes.

SPORTS TOURISM IS ONE OF THE MANY BIGGEST ITEMS THAT CAN PROMOTE A DESTINATION. UK FOR EMBRACED SPORTS TOURISM AND MANY PEOPLE HAVE USED THEIR CLUBS TO PROMOTE THEIR COUNTRY. Uganda is also following suit to promote our tourism industry. as a ministry, we have to promote our uganda cranes fame to promoted our country at all times