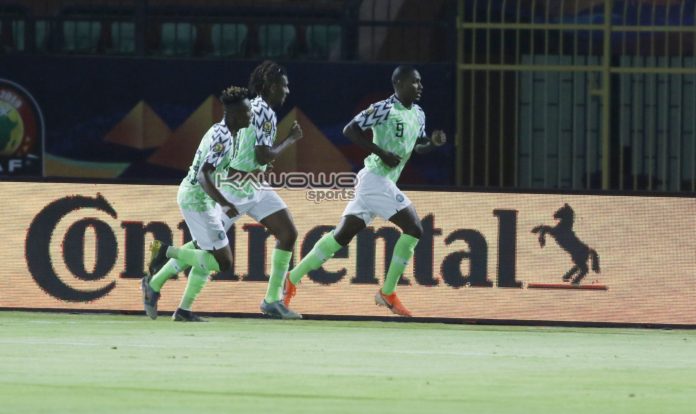 Nigeria Super Eagles beat Tunisia Carthage Eagles 1-0 in the third place play off match of the AFCON 2019 tourney at the Al Salam Stadium in Cairo on Wednesday night.

A second minute strike from burly forward Jude Odion Ighalo gave Willi Gernot Omeruo’s coached side the third place that also assured them of a podium finish with bronze medals.

Ighalo, a forward based in China with Shanghai Greenland Shenhua pounced home a rebound following Ahmed Musa’s spilled ball from the left.

This was Ighalo’s fifth goal of the championship following earlier strikes against Burundi, Cameroon (two) and lately a penalty against Algeria in the semi-finals.

Tunisia’s Khazri Wahbi had a free-kick blocked from 20 yards on five minutes.

After 11 minutes, Ighalo found himself in an acute angle but the Tunisian defender Nassim Hnid cleared the line.

On the quarter hour mark, Tunisian left back Hadadi Oussama had a shot narrowly sail out.

Nigeria’s Wilfred Onyinye Ndidi was booked by referee Gehad Gerisha for a foul on Badri Ance on 18 minutes.

The North Africans called for their opening change towards the end of the first stanza.

Ighalo limped out at the close of the first half.

His place was taken by Galatasaray forward Victor James Osimhen as the second half returned.

Chaouat shot in the side netting three minutes into the second half.

Wahib had a curling shot blocked by defensive wall as Tunisia sought  for the equalizer in vain.

Slit Naim was introduced for Anice Badri Tunisia change after 10 minutes into the second half.

On the half mark, Tunisia’s Ghaylen Chaaleli got cautioned for a foul on Peter Etebo Oghenekaro.

Tunisia suffered a blow when defender Nassim Hnid limped out after 66 minutes.

Nigeria called for their second change with 15 minutes to play.

Nigeria remained the dominant force in the five added minutes of injury time.

Iwobi’s free-kick was parried by goalkeeper Cherifia for a corner before full time.

Nigeria take third place with the final game of the 32nd edition to be played on Friday between Senegal and Algeria.

This is the 8th time that Nigeria has finished third in the history of the AFCON championship.