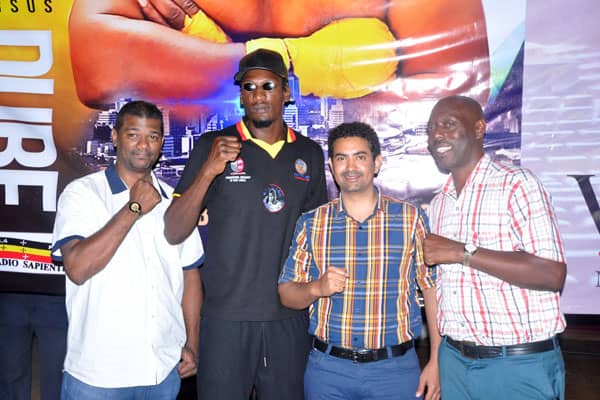 This highly billed continental fight has been dubbed as the “Clash for Africa” and will take place on Friday, 29th November 2019 at the Kansanga based International University of East Africa (IUEA) Auditorium.

For a long time now, I have prepared well for this fight, my opponent has a great record but i am not scared.” I therefore call upon my fellow Ugandans to come and support me as i rise our country’s flag. I am ready to rumble any time.

His coach Abdul Tebazalwa is equally optimistic that the fighter is ready.

“He (Kiwanuka) is well-rested and has been training well from the last fight. We are ready to capture this belt,” Abdul Tebezalwa noted.

The Uganda Professional Boxing Commission will ensure that fight is organized in a professional way and ends successively. We are to make sure that the rules and regulations are respected as we look forward to a great fight.

Dube is quite an experienced fight with 15 fights, 12 wins (7 by knockouts) and has tasted three losses.

Before the main fight, there are a couple of lined up undercard fights as Latib Muwonge against Jimmy Odongo for the national title.

Mercy Achayo will face Teddy Nakimuli in the only ladies’ contest on the night.