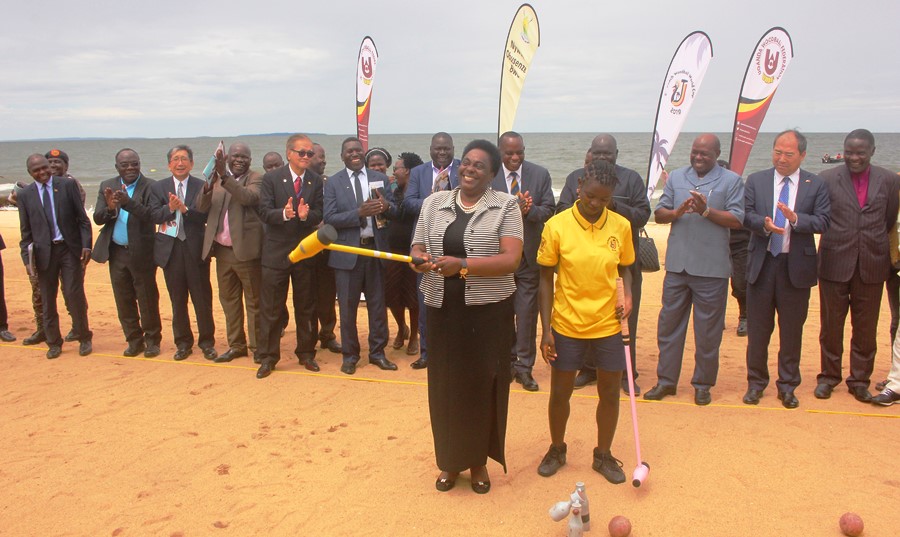 Where else in Uganda could the second Beach Woodball World Cup be held than along the shores of Africa’s freshwater body, Lake Victoria?

A cool breeze often decimated by slight rain drizzles, intermingled with sunny conditions treated the guests to true tropical African weather environs during the official launch of the 2019 World Beach Woodball championship at Spenah Beach, Entebbe on Monday, May 27.

The traditional dancers from Cranes Performers, the Airforce Band, pupils from Motherwell Primary School – Mutungo, Indian and Chinese performers all entertained the crowd in equal measure.

Cabinet Minister in Charge of General Duties in the Office of the Prime Minister Mary Busingye Karooro Okurut ably represented the first lady and minister of education and sports, Janet Kataha Museveni during the colorful launch.

In her address delivered by Okurut, the first lady Mrs Museveni congratulated Uganda upon the successful hosting of the second Woodball World Cup with anticipation that this milestone will grow the sport further.

Representing the tournament Local Organizing Committee (LOC), the chairperson Vicent Kisenyi appreciated the Governments of Uganda and China, all the partners, sponsors and stakeholders for the effort of developing woodball in Uganda and helping to organize this particular championship.

It has taken a combined effort of different parties at play. From the Government of Uganda, China, sponsors and partners, we thank you all in a special way. To the participants, enjoy your stay in Uganda and we wish you a pleasant time. May the best team win.

Kayongo who doubles as the Uganda Woodball Federation and African body boss saluted the travelling countries with a special token of appreciation to Government for continued financial and logistical support in developing this game over time.

I, first of all, thank Government for helping this baby sport grow over the years. I am thankful to all who have helped us in one way or another. Please keep the spirit. I welcome all the participating countries. Please feel at home, this is the Pearl of Africa.

The tournament tees off on Tuesday at Spenah Beach as early as 9 AM.

There will be the singles, doubles, mixed doubles and team events.

Day one will mark an official practice session in the morning, then singles and the youth championship before the start of the day one for the Africa Woodball Congress.

The teams are accommodated at Imperial Golf View Hotel in Entebbe. 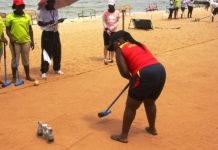