The 2019-20 Uganda Rugby Premiership season kicks off on November 29, 2019, with 5 games on matchday one across different venues in the country.

The new season was ushered in by the Uganda Cup in which Kobs turned out victorious against Heathens in a nail-biting contest at the final played at Kings Park Stadium, Bweyogerere a fortnight ago.

Ten teams are set to compete in this season’s championship, and now with a few days to kick-off, let’s take a look at how they line up and the potential they carry into this new season.

Defending champions of the 2018-19 Uganda Rugby Premier League title, the Kyadondo Rugby Club based outfit popularly known as The Green Army are arguably the strongest side going into the 2019-20 season.

The squad has been reinforced by a number of players promoted from fellow Kyadondo side, Buffaloes and some returning from other clubs after seasons away. Scott Oluoch and Joseph Oyet are back in the team while Innocent Gwokto and Dalton Kato join from Buffaloes.

Heathens will be led by veteran Rugby Cranes international Michael Wokorach, assisted by lineout specialist Charles Uhuru. The squad is not short of experience, and have the old guard of Alex Mubiru, Bishop Onen, and Faisal Gamma to reinforce the army.

The Kobs are having the time of their lives at the moment. From winning the Uganda National Sevens series last season to starting their 2019-20 campaign with victory in the Uganda Cup, the Blue Army side are already looking like favourites to clinch the premiership.

With a new man at the reins in former Uganda Rugby Cranes scrumhalf and club legend Davis Kyewalabye, backed by strong signings in the transfer window, Kobs are going to be the team to beat this season. The addition of rising stars Philip Muhozi and Boboney Blair from Warriors in the pack as well as Daudi “Muscle” Semwami and Daniel Ortega in the backline to the blue army of Brian Asaba, Pius Ogena, Justin Kimono, Conrad Mukwaya and Adrian Kasito have reinforced the side that targets to make a clean sweep of the 2019-20 season.

The Pirates enter their first full season at new home Kings Park, Stadium in Bweyogerere, a venue where victory against the top two powerhouses in the league has eluded them. The Sea Robbers look more youthful this season than ever before with fresh faces graduating from championship side Sailors, and signings in Michael Amolo, Stephen “Bujju” Alul and Alex Aturinda that had an exciting debut in the Uganda Cup campaign.

With a new captain on deck to steer the ship in Nathan Bwambale, Pirates will miss the services of seasoned veterans who were instrumental in the treble-winning 2016-17 season, including tight forward Joel Anguyo who was their penalty kicker and mercurial flyhalf Ivan Magomu who is pursuing his bar course upcountry in Mbarara.

The Black Pirates are however a very clinical side who enjoy a lot of possession in attack and are equally strong in defense. Bobby Musinguzi’s side had the most superior points difference from the past 2018-19 season and will look to even better that this time around.

Mongers come into the 2019-20 Premier League off a rather disappointing fourth-place Uganda Cup finish, but the Entebbe-based side is inspired by a new sponsorship deal from Plascon Paints.

The Entebbe Mongers have a fortress of a home ground, The House Of Pain, where they have pulled off mammoth upsets and victories.

Led by scrumhalf Paul Angana, Mongers are poised to be the leaders of the rest, and could even be close enough to send some shock waves to the top brass.

For a side that has always been looked at as the second-tier feeder for record champions Heathens, the Buffaloes have punched way above their weight when it comes to competing in the long and demanding premiership season since inception.

Eric Tolit was unveiled as captain at the beginning of the season for his dedication, hard work, and loyalty to the Kyadondo outfit, and will lead the dark horses of Ugandan rugby who have always given the top teams a run for their money as they attempt to close the gap between the leaders and themselves.

Ever since the 2017-18 season where they finished a close second place behind Black Pirates whom they handed their only defeat that year, Rhinos have conspicuously been a shadow of themselves. The Rhinos have gone through turbulent times in the past season, from players walking away to changing managers more than they have won games.

This season, however, they look to have cleaned their slate and with Joshua Ntale taking the hot seat as head coach alongside veteran front row Martial Tchumkam, the Rhinos are breathing life into a side that once dominated pack play in local rugby.

At the beginning of every season, there’s always that one premiership side that loses almost all its playing department. And this year, it has been the Warriors. On top of losing most of their starting XV, the Warriors will be without coach Kevin Makmot who led them through the 2018-19 campaign that ended with an impressively high ranking.

Now the Warriors have been left to drop down the log, and are holding onto the few remaining strings for survival with their few loyal players, debutants and some coming out of retirement.

The Mulago Rams, who share a home ground with Makerere Impis at the Graveyard, are a constant fixture in the relegation battle of top tier premiership rugby in Uganda. Relying heavily on young players just from the schools’ league backed by a few nearing their retirement season in season out, this has been Rams’ own undoing as the outfit has had to build a new team each time.

Openly vocal coach Richard Lumu will have a herculean task to save his side from relegation this season and will have to feature in some games to bolster his team’s chances like we’ve seen in past seasons.

The Jinja Hippos continue to enjoy life in top tier rugby, and Ugandan rugby continues to enjoy the short trip across the Nile River during the season. Having performed well in the 2018-19 campaign, the club has had no choice but to surrender a number of their top performers to Kampala clubs. They, however, have a wide pool of players to pick from in Jinja and will put up a good show.

Makerere Impis are the only university side in the 2019-20 Uganda Rugby Premiership, returning immediately from the Central Region championship where they went unbeaten for the one season they were relegated.

The youthful and energetic side won the Shield in the recently concluded Uganda Cup, and come into the season with ambitions to stay longer. With the return of flyhalf Henry Nsekuye to active rugby and a rising star at the wing in Luhoni Jonathan, Impis seem to have all hands on deck this season.

Off the playing field, Impis boasts of an inspired technical bench led by former captain, now coach Katuntu Emmanuel, loud and vibrant fans both online and offline and promises of support from the university games union.

The first game of the 2019-20 Uganda Rugby Premier League season will be under the floodlights at Kyadondo Rugby Club as Heathens battle Kobs on Friday night. 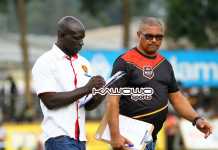